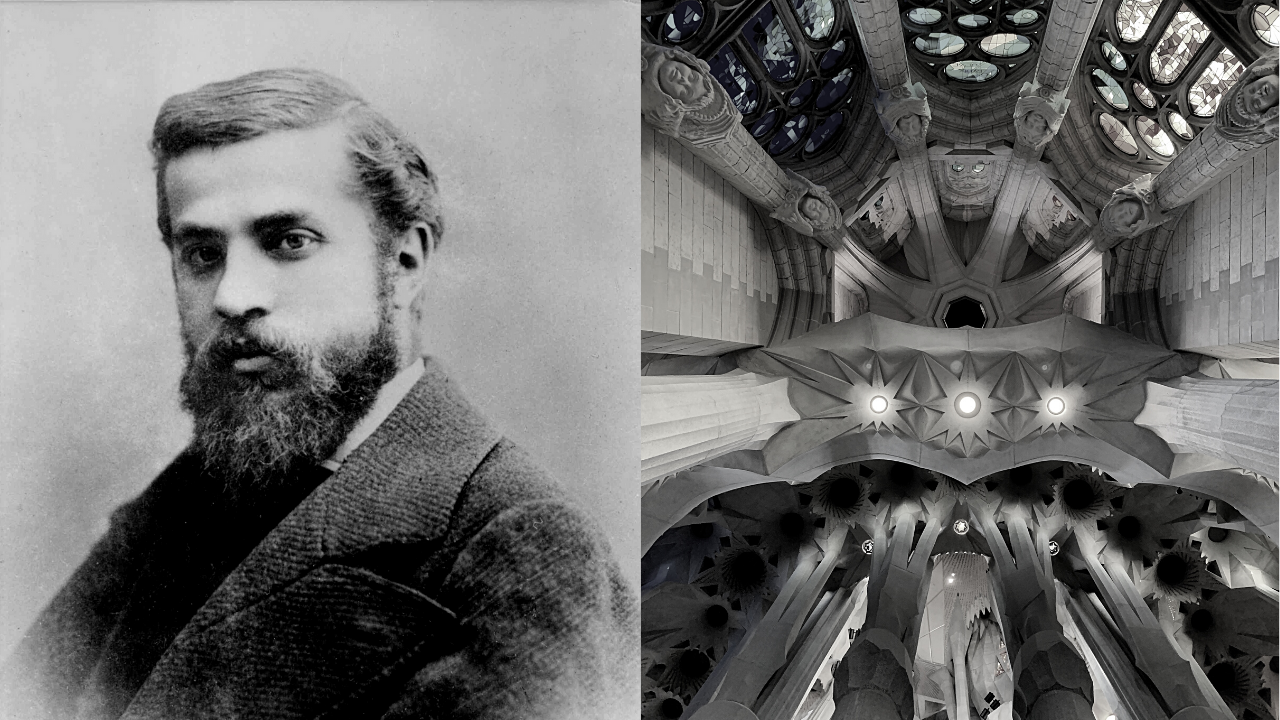 Learning from the Masters: Antoni Gaudí

Gaudi's influence on the architecture and character of Barcelona is unmistakable; his style challenged categorization into art movements rather emulated the flowing rhythm of nature. He possessed such a unique view of the world that his college president commented during graduation, "we're in the presence of either a genius or a mad man." Few at the time recognized his work but history remains the evidence that there's no one like him, his architecture stands distinct. His capacity for innovation was such that he surprised even his collaborators, such as when he used pillars instead of walls, inclined columns, catenary models, equilibrated arches, intersecting vaults, etc.
Gaudi's passion for architecture burned so intensely, he worked every day of his career so much that he became unrecognizable at the time of his death. He broke with the lines of all the other houses, developed his style, and began to perform things that he strongly believed in and was absolutely a scandal for most of the people. Some of his highly acclaimed works in and around Barcelona include Palau Güell, Casa Batlló, Casa Milà, Park Güell, Sagrada Família and the church at Colònia Güell.
“Those who look for the laws of Nature as a support for their new works collaborate with the creator.”-Antoni Gaudí

Antoni Gaudi is a priceless part of Barcelona's history who transferred a collection of authentic works for later generations to contemplate. UNESCO has readily recognized Gaudi's efforts behind shaping the soul of Barcelona, by including seven of his projects in UNESCO World Heritage sites to protect and prosper. His buildings are clearly identifiable with characteristics of mosaics, organic forms, cast iron lattices, catenary arches, gigantic columns, and most importantly, no straight lines!

Nature is the only truth

Gaudi's obsession with nature began in childhood with a diagnosis of rheumatism, a condition that left him isolated. The medical ailment left him sick, so he would not play with the rest of the children and ended up spending long hours alone just observing nature. He was a humble being and had immense gratitude for Nature; he did not believe in putting himself on the pedestal and regarded his works as a discovery of nature.
At Park Guell, Gaudi sought to infuse his work with the complex patterns he'd observed in nature. It was an endless quest that also turned him into an avid recycler. The ancient, old styles and ceramics before been in here were in balconies, kitchens, bathrooms, etc.
“There are no straight lines or sharp corners in nature. Therefore, buildings must have no straight lines or sharp corners.”-Antoni Gaudí

Gaudi was nicknamed to be God’s architect by his contemporaries for his epiphany was that man creates with straight lines, while God fills nature with graceful curves, angles, and colors. At Casa Batlló, Gaudi abandoned straight lines utterly, and the consequence endures nothing short of bewildering especially the roofline, which it said illustrates a slain dragon. He created such beautiful architecture without worrying about its completion time as it was his patronage to god and stated that his clients were in no hurry.
“Color in certain places has the great value of making the outlines, and structural planes seem more energetic.” -Antoni Gaudí

Confluence of Art and Technology

Gaudi’s ultimate true goal was to arrive at a “total work of art”, a work in which there was no distinction between the most minor ornamental detail and the most complex structural solution. He took the architectural styles of the past as his beginning point and progressed from there, considering the concept, the construction techniques, and the results of the trialing. During his school days, he pursued an amalgam of disciplines by learning subjects such as calculus, descriptive geometry, aesthetics, philosophy, rational mechanics, etc. exposing his belief that art and technology go hand in hand.

The Catalonian Architect’s most impassioned work was Sagrada Familia, the Architect spent his last 14 years working on perfecting it and conductive fascinating studies. An extensive array of three-dimensional geometrical models, maquettes of buildings, photographs, drawing boards, plans, Venetian mosaics, ornamental details, and molds of figures were piled up in Gaudi's workshop which was exactly implemented while its construction.

Onlooking the interiors, the design resembles a stone forest showcasing powerful tree trunks reaching for the sky, complete with branches and leaves at the top. Gaudi orchestrated every detail here, even selecting the varied types of stone for the pillars to optimize weight distribution. The Basilica is one of the UNESCO heritage sites and invites many visitors even though it is still under construction.