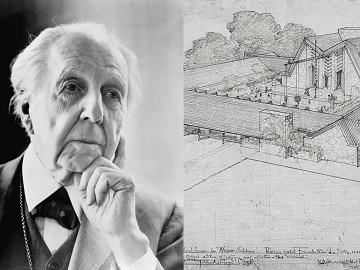 Frank Lloyd Wright made a lasting impact with his extraordinary multifaceted career in the field of Art and Architecture. He’s been a recipient of many honors and awards for his works and is still looked upon in the fraternity for his humble architecture integrated with nature. Some of his famous works include Robie House, Falling Waters, Guggenheim Museum (NYC), and Kentuck Knob.

“Building becomes architecture only when the mind of man consciously takes it and tries with all his resources to make it beautiful, to put concordance, sympathy with nature, and all that into it. Then you have architecture.” - FLW

Throughout his journey, he believed nature to be the ultimate god and his buildings worshiped the landscape. Buildings were curated to become a part of the landscape, rather than enhance the existing landscape’s beauty. He believed that buildings were much more than places to be, rather looked at them directing experiential lifestyle for its inhabitants. He proclaimed that investing in good architecture is vital as they play a huge role in one’s wellbeing by creating them in turn. His best work in Organic Architecture, Fallingwater is a simply exquisite weekend retreat built to celebrate the intrinsic landscape and is integral to it.

Wright’s dream was to solve the small house problem before anything else and eventually became the driving force behind American system-built homes which shifted the perspective of affordable housing using pre-cut members, reducing waste and labor costs. Wright worked over 30 variations for these houses intransigently, which have been well documented in over 960 detailed drawings exclusively for this project. Some of these are located presently in Wisconsin, Illinois, Indiana, and Iowa.

The majority of his works are distinguished styled residences responding to the need of time namely the Prairie House and Usonian House. The Prairie Style was generally conceived to belong, open-planned, straight-sided boxed type and type of the same height such that intimacy and resemblance to the landscape can be intact.

Another prototype responding to the financial crisis was the Usonian Houses, which focused on simple, affordable, and elegant architecture responding to the changing socio-cultural needs of Americans. The typical features of this house were that they were single-story, small, used native materials, flat roofs, and used passive strategies for heating and cooling to achieve seamless interior-exterior relationship which he never compromised on.

Not just limiting his vision to buildings, he had ideas for a modern tech-savvy democratic city based on automobiles which he continued to perfect till the time of his death. His approach had always been to keep values at the core of his concepts and then further supplement them with technology as a tool and not the master. Public ownership of utilities was proposed over corporate ownership and individualistic ownership of a home, farm, and workplace replacing absentee ownership. The broadacre city’s process had a central idea for the growth of individuals expressed through democracy, freedom, beauty, and space.

“The mission of an architect is to help people understand how to make life more beautiful, the world a better one for living in, and to give a reason, rhyme, and meaning to life.” - FLW

Frank’s wife Olgivanna insisted him on sharing his genius by motivating him to build people, architects and educate young men and women in the philosophy and principles of organic architecture so that they could in turn help him with his work. Eventually, he started a fellowship program in collaboration at Taliesin focusing on architecture as a way of life, and has groomed over 1000 apprentices. Fellows learned concepts from the bottom-up by ditching the drafting board and getting their hands into construction, nature of materials, doing repairs, and participating in all the allied arts. Taliesin attracted fine people and brought out the best in them, many of which even stayed for a lifetime and have spoken highly about their experience.

“1. An honest ego in a healthy body

3. A heart to feel nature

5. A sense of proportion (humor)

6. Appreciation of work as idea and idea as work

8. Capacity for faith and rebellion