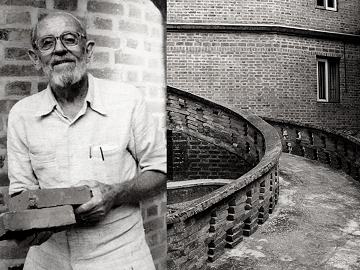 Learning from the Masters: Laurie Baker

Leading an inspiring journey after graduating from Birmingham school of architecture, the Second World War got Baker’s warship stuck in Mumbai for three months when he explored the country's Architecture and crossed paths with Mahatma Gandhi. Upon observing his handmade shoes Gandhi persuaded Baker to use his ingenuity and skills for designing buildings for the poor. Later, the architect did go to England for a few months but only to bid goodbye to his country and returned to India; this time it was an association for a lifetime. Laurie bakers architecture can be easily distinguished by un-plastered brick finish, brick jalis, and filler slab roofs as a trademark of his construction.

Baker was a part of the International Leprosy Mission and worked tirelessly in building several Leprosy Centre buildings around the country giving service for the cause and wellbeing of the people. Moreover, upon further exploring India, he noticed that a lot of people lived in the slums and on the railway stations and over time developed a strong desire to see every person with a roof over their head. Baker was undoubtedly the poor man’s architect; he had this overarching desire to serve the poor that prompted him to build what even the poorest of the poor could afford but the quality of work remained rich. For some, architecture is a profession and but for Baker, it is passion-driven by the urge to serve society. His vigor and passion towards his work triggered a revolution in the way architecture hand been conceived so far and his contributions still inspire people in the field of architecture.

Local Material and Technology- Relationship with the brick

He used material to the best of his potential alongside technology that was readily widespread in the region and perfected it over time. These characteristics of local rootedness and appropriate technology in his structures, delivered in the finest quality made a house or a shelter or a building more affordable as compared to the buildings done by other architects. The design was consistently simple yet attractive he aimed at energy and environment conservation for which he employed the locally available construction material. Emphasis was laid upon using material that consumed less energy like lime boulders and seashells. He used cement and steel sparingly in his buildings which commercial architects hardly ever gave a thought to; Baker’s intentions made him who he is.

"I have my own principles, which I am unwilling to abandon. I dislike falsehood and deceit. A building should be faithful."- Laurie Baker

Laurie Baker’s structures reflect that through architecture one can add value to the arrangements of society, culture, and geography. For the architect it is a medium of expression; a means of creating something out of nothing, and how they fill it and connect them is an art as much as it is a science. He curated buildings that seem to flow and become a part of the surroundings while emphasizing using locally available materials, adopting cost-effective strategies, and reducing energy consumption. His architectural response to the social and climatic issues was a deep reflection of his understanding of rural India and left them exceedingly contented with their dream home.

Baker’s impact over South India was immense, he built over 1000 low-cost structures in Trivandrum most of which were low-cost houses for the poor. To achieve this extensive impact, he used technologies to reduce material while enhancing the outcome some of which include filler slabs, arches, brick jali, and domes. One simple suggestion he applied for cost reduction was including the use of Rat trap bond for brick walls, carving niches in walls that increased the strength and provided readymade shelves, thin ferrocement roofs, waste optimization at the site level, and many times even using waste such as bottles, glass for stained glass effect. These techniques are still prevalent in the Architecture of Southern India and attract students from all over the country to learn them hands-on at the Laurie Baker Center.

"Cost-effective houses are not just for the poor, they are for everyone. This entire classification is wrong."- Laurie Baker